Opening next week at the Gate Theatre is the Galway International Arts Festival stage version of Paul Muldoon’s Incantata, starring Stanley Townsend and directed by Sam Yates. It’s a beautifully staged rendering of one of the great Irish poems of the last century – not a recitation but a fully theatricalised adaptation (as is evident from the image below).

Last summer when the show was on in Galway, I moderated a post-show discussion with Stanley and Sam. They discuss in detail how they put the show together, describing how it evolved through the initial ideas and into rehearsals. It’s a wide-ranging conversation about acting, directing, the process of adaptation, Muldoon’s poem itself, and the legacies of Mary Farl-Powers (the visual artist; also Muldoon’s former partner and the subject and dedicatee of the poem). You can listen back here: https://soundcloud.com/nuigalway/incantata-post-show-talk 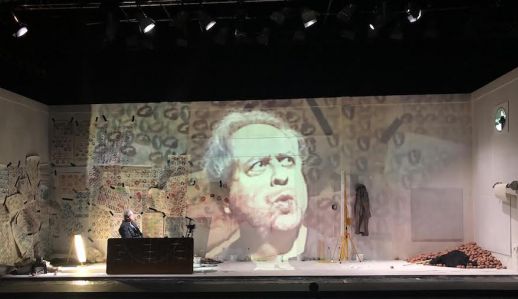 Earlier this evening, I had the great privilege of launching a new book about Brendan Behan, edited by John McCourt and published by Cork University Press. The launch happened as part of this year’s IASIL conference, which is happening at Trinity College Dublin.

I’d put together some speaking notes beforehand and have written them up here in the hope of letting more people know how important and timely this new book is. Obviously these were written to be read aloud (and were promptly ditched once I reached the podium) but I hope they’ll do some justice to it. The book also shows that despite his fame, or his infamy in the eyes of some, Behan has become a neglected Irish writer. We have continued to see plays about Behan, such as Brendan at the Chelsea with Adrian Dunbar. And his work continues to be staged in smaller venues. Nevertheless, it is important to observe that the last production of The Quare Fellow at the Abbey was in 1984, and of The Hostage in 1996. The last full-length book on his work was John Brannigan’s study from 2002, and while Behan has not been ignored in subsequent years, nor has he been essential in the way that someone like Flann O’Brien has become. And given how much the study of Irish literature has changed in the last 20 years – and given also how Irish theatre practice has changed during the same period too – this feels like a very regrettable oversight.

There are many ways in which the authors in the book set out to rectify that oversight, but I’d like to highlight just a few of the things that I most appreciated.

The first is that several of the essays explore the persistence of a confusion between Behan the man and Behan the character – something that was a problem even within his own lifetime. Derek Hand points out that, from an early stage, Behan was a character not just in his own memoir The Borstal Boy but that he was also appearing in other people’s books, The Ginger Man being possibly the earliest example.

Paul Fagan makes a similar point when he gives a detailed account of how Behan appeared in Flann O’Brien’s Cruiskeen Lawn columns – a highlight of which was a fake presidential campaign in which Behan went up against Myles na Gopaleen for the presidency of Ireland – a set of writings that, in their absurdity, seem  prescient of our own times, when all manner of people can become presidents or prime ministers.

As John McCourt states, Behan’s writing is autobiographical, but treacherously so – and for this reason it’s particularly valuable to encounter Maria diBattista’s chapter, which calls for us to read Borstal Boy as we would a novel, something she does herself, teasing out its links with Woolf’s Orlando and Wilde’s De Profundis.

In fact, Oscar Wilde figures prominently in the book as a touchstone for Behan, and this points us towards a second reason to appreciate it. In the study of Irish theatre, the theme of homosexuality has been explored in great depth during the last decade, particularly as a result of the work of Fintan Walsh. But our awareness of Behan’s sexuality – and of his conception of himself as what we might now call a queer writer – has not caught up with the scholarship. Again the essays on Borstal Boy are fascinating here, in particular one by Michael Cronin that is directly focused on sexuality in that book. I was also intrigued by Riona Ni Fhrigl’s reading of Behan’s rish language poetry in terms of sexuality: she notes, for example, that he characterizes the Irish language as male rather than female in one of his poems, something that can be viewed as deliberately transgressive, and which can be seen as representing a coded homoeroticism that is evident elsewhere in his writings.

We also need to think again about how to situate Behan as a writer, while also being mindful of the fact that he resists categorization. It’s become perfectly acceptable for us to see Beckett as both European modernist and as enamoured of the Irish Music Hall tradition but we haven’t often seen a willingness to do the same for Behan. Here, several of the essays mention the importance of Paris to Behan, both personally and aesthetically: in a wide-ranging essay, John Brannigan points out his interest in existentialism, for example, while also revealing that Behan’s The Big House played at the Pike in a double bill with a play by Jean Paul Sartre. That essay also shows that there’s more to be said about Behan’s republicanism too.

In a similar vein, Deirdre McMahon calls for us to see Behan’s writing as an example of late modernism – something that the book’s essays on Flann O’Brien and James Joyce also make clear. Implicit in this argument is a way for us to think about producing Behan again. As Deirdre points out, Behan’s plays have become trapped in a style of naturalistic representation. A focus on their modernism, or even their postmodernism, could make them feel new for audiences – but might also give us more faithful versions of the plays. The same can be said of the prose; Derek Hand makes the case that the popularity of kitchen sink realism in the 1950s has overdetermined our understanding of The Borstal Boy.

We could also think again about what we mean when we talk about “Behan’s plays”. Michael Pierse offers an important essay that shows that the script of Richard’s Cork Leg that has been handed down to us is not necessarily the best version of the text. We also have two excellent essays that address the long-running question of the relationship between An Giall and The Hostage, and both essays resist the idea that the Irish language version is an authentic original that The Hostage betrays. I was very grateful for Cliona Ni Riordan’s suggestion that both plays can exist side-by-side, while Michael Mac Craith compares An Giall with L’Aube by Ellie Wiesel as works that subvert the notion that the English soldier must always be the enemy, thereby showing the possibilities offered by a comparative approach.

This book wants us to look at the full span of Behan’s writing, in both Irish and English, and displays the benefits of doing so. It also shows that we need to reconstitute our sense of that oeuvre. We need a new edition of the collected plays, a new edition of the Irish language poetry, and more. We also need to start staging the plays more often.

I want to congratulate Cork University Press for doing such a great job with the production. As always, it’s beautifully produced, competitively priced, and easy to read – and unlike almost every other academic publication I have read recently I could find no typos…

I also want to congratulate John McCourt for his exemplary editorial work. His contributors come from a range of career stages, from PhD to retired, and from a variety of national, linguistic and disciplinary contexts. While all of the essays show their authors’ distinctive styles and preoccupations, it’s a peculiar strength of the book that it can be read and enjoyed from start to finish as a coherent study that will be equally useful as both an introduction to Behan and as a detailed critique for those of us who think we know his work well. It’s also a fine example of John’s continuing willingness to shed light on neglected writers, something we’ve seen in his work on Anthony Trollope.

So I  warmly recommend it, and look forward to seeing its impact on scholarship and production during the years ahead.

Earlier this year, I had the great privilege of acting as the 2019 Burns Visiting Scholar at Boston College. As part of my visit I gave a public lecture on Shakespeare and the Modern Irish Theatre – my suggestion being that performances of Shakespeare have been used throughout our history as a way of thinking about the relationships between England and Ireland. It’s a wide ranging lecture that includes references to everyone from Yeats and Gregory to Orson Welles to Fiona Shaw and beyond.

Thanks to the Burns Library for posting the lecture online – as below:

I recently came across a Soundcloud recording of a lecture I gave at Galway City Museum about JM Synge and Galway a few years ago.

I’m talking about that theme from three points of view – his links with the Aran Islands, with Galway city, and with Connemara – and looking at famous plays like The Playboy of the Western World but also his travel writing.  The whole lecture is about 45 minutes’ long.

This week we feature a guest post by our current Burns Visiting Scholar in Irish Studies, Patrick Lonergan, Professor of Drama and Theatre Studies at the National University of Ireland, Galway

On 23 April 1916, the British academic Israel Gollancz published A Book of Homage to Shakespeare, a beautifully produced volume that gathered poems and essays to celebrate the 300th anniversary of Shakespeare’s death. It’s an impressive volume, including contributions from major British writers such as Galsworthy, Kipling and Hardy – but it also did much to invent what we might now call ‘Global Shakespeare’ by featuring work not just in English but in Hindi, Urdu, Afrikaans, French, Russian and many other languages.

It also includes a contribution in Irish. Written by Douglas Hyde, a founder of the Gaelic League and (later) the first President of Ireland, it’s a poem written in the form of a dream vision, in…