So yesterday I went to see Tribes by Nina Raine at the Gate. It’s running as part of the Dublin Theatre Festival, and is the second production in Selina Cartmell’s inaugural season at that theatre.

I’d been delighted when I’d seen the play in Cartmell’s programme. Raine’s play has been successful throughout the English-speaking world, and if this blog has an idée fixe, it’s that Irish theatre has been at its healthiest when it engages with international work. Good international plays allow our actors, designers and directors to push themselves in new directions, and they stimulate the creation of new Irish plays. There is more than a hundred years of evidence that shows this happening, from the Dublin Drama League producing the Gate in the 1920s, to the way in which the new wave of Irish writers in the 1960s were responding to Brecht and Tennessee Williams, and so on.

But I also think Tribes is a good play in its own right, and was glad to have the chance to see it – just as I’m very excited by the chance to see productions like Assassins and Look Back In Anger at the Gate next year.

On first glance, the set-up of Tribes might seem a bit clichéd, a riff on the “Guess Who’s Coming to Dinner?” theme. We open in the living room of a family whose three adult children include a son, Billy, who has been deaf since birth – and as the action develops, we learn that Billy intends to bring home a first “proper” girlfriend (Sylvia, a young woman who is going deaf) to meet his parents and his brother and sister.

His family welcome the idea of Billy being in a relationship, but not unreservedly so – both his father and brother fear that they might lose him to what they call (not at all positively) the “deaf community”. So the play concerns Billy’s attempts to establish his independence while also trying to negotiate around the different loyalties that he owes to the people in his life (the different “tribes” of the play’s title).

But layered on top of that theme is an exploration of communication and meaning, one that considers how we share feelings and concepts with each other and thereby build communities.

For example, there are some very interesting explorations of how music means, and the careful choice of songs – from We Come 1 by Faithless to “The Humming Chorus” in Madame Butterfly – allows us to think about the relationship between sound and emotion. This is made movingly evident in a scene in which Sylvia plays Clair De Lune – something she knows she won’t be able to do once she becomes completely deaf.

That scene also highlights one of the play’s most interesting forms of stage-craft, which is the theatricalisation of the production’s surtitles. These are projected on screens above the playing area in the first couple of scenes in order to make clear what Billy is saying when his speech becomes less distinct, or to “translate” sign language into standard English. But gradually the screens start to use other forms of communication: musical notation, CCTV footage, projections, and ultimately the private thoughts of the characters as they argue with each other (from the sarcastic “We’re in a Pinter play” to the simple “I love you”). Just as the characters are thinking about how body language, signs, words and music combine to build relationships, the production is also thinking about how theatre communicates to audiences.

All of those features make this a stimulating and engaging play, but the reason that it needs to be seen is the quality of the production. Given Raine’s focus on themes of belonging and identity, it is of the utmost importance that the action has been moved from the south of England to what seems to be Dublin – with only the tiniest of changes to the script being necessary (for example, where Raine’s original says that The Guardian want to profile Billy, the production makes it The Irish Times).

It says something very significant about Irish drama – and Irish culture more generally – that middle class Dublin is seen here as being more or less interchangeable with middle-class England. Yes, identity in the play is very fluid anyway – the father of the family is played by Nick Dunning as English, but the rest are Irish; they identify themselves as Jewish, but also grapple with other identities related to deafness, mental illness, Irishness, being a “northerner”, and so on.

While it is important that we have plays that explore the distinctive qualities of Irish life, it feels significant that this production of Tribes shows our links with other cultures, and in particular that it demonstrates how new English drama has something meaningful and immediate to say to Irish audiences.

This relates to a broader pattern that we’re seeing on the London stage, one that was evident when Denise Gough presented her character in People, Places and Things as Irish without the script needing her to do so – or that has Conor McPherson casting lots of Irish actors in his excellent Bob Dylan musical The Girl from the North Country – or that (much more problematically) sees The Ferryman being celebrated as the best new British play of this year. In London it’s clear that Ireland is no longer seen as “Other” in quite the way that it once was, so it is interesting that this production of Tribes is reciprocating that way of thinking about what we have in common with our nearest neighbour.

It’s also very exciting that the production of Tribes is true to the history of the Gate, while also representing a new departure. The Gate always showed that one way of being a national theatre is to stage excellent Irish productions of international works. Tribes is very much in that spirit, showing Dublin audiences something new that could open up avenues for our own writers, directors, designers, actors, and theatre-goers.

There’s also the pleasure of seeing a strong ensemble working very well together. We have Nick Dunning and Fiona Bell’s finely choreographed representation of a marriage that involves both intimacy and hostility. As the oldest brother Daniel, Gavin Drea gives a very considered presentation of a young man who is grappling with mental illness and thwarted desire – one of those performances that in Reviewese a newspaper critic might call a “revelation”, not only because it shows us truths that we might not have been aware of, but also because it gives Drea a chance to do things technically that I hadn’t know he could do.

In the less developed role of Ruth, Grainne Keenan gives a very subtle exploration of what it’s like to be the person who is most often ignored in a family, the person who is often most in need of attention and least likely to get it. And as Billy, Alex Nowak presents his character’s development with a moving intensity, allowing us to sympathise with him when necessary, condemn him when necessary, and ultimately to accept him. 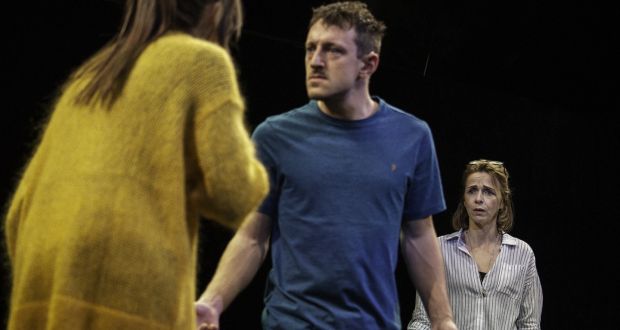 But the key performance is given by Clare Dunne as Sylvia. I last saw Dunne in the Donmar’s Shakespeare Trilogy in London (soon to be broadcast to cinemas), and was very struck by the fact that although people went into the theatre talking about Harriet Walter, many of them came out talking about Dunne, whose Prince Hal in Henry IV was (let’s use the cliché again) a revelation – not only about Hal, but also about how gender works in Shakespeare, and how Irishness can be used to find things in Shakespeare’s plays that were always there but have been forgotten (she played Hal with a broad Dublin accent).

(Keenan, Dunne and Denning in Tribes)

Here as Sylvia she very noticeably lifts the play when she arrives in the fourth scene, giving a performance that is massively sympathetic. There’s a parallel in the script between Billy’s movement away from his family on the one hand, and Sylvia’s movement from hearing into deafness on the other – and this parallel allows Dunne to present a very carefully prepared performance that is technically excellent in terms of voice, movement, and her physical interactions with the other actors. But what Dunne is also showing us here – as she did for Hal in Henry IV also – is how change produces feelings of both loss and elation in us. She is one of those actors who knows how to resolve contradictions, showing us that part of the complexity of the human condition lies in working out how to reconcile the clash between loss and discovery.

So I loved the rigour and complexity of the acting – which, of course, has to be attributed to the direction of Oonagh Murphy. It’s exceptionally positive to see her being given the space of the Gate stage to show what she can do. And I also need to mention the excellent design by Conor Murphy, Mimi Jordan Sherin, Ivan Birthistle and Conan McIvor.

But there is one other point to be made. When I saw Tribes yesterday, the auditorium was considerably less than half full. Yes, it’s the middle of the Dublin Theatre Festival, and yes Raine is not a well known writer, and the cast isn’t starry in the way that the Gate’s DTF productions have sometimes been in the past. But I thought this lack of audience interest was a shame, not only because it’s new international work but also because it’s written by a woman, directed by a woman, programmed by a woman and has roles for three women and three men. Post-WTF, this is the kind of work that needs to be supported and seen.

But there are many reasons to see this play, starting with the fact that it’s a good night out: if you love plays, if you love drama, if you love theatre – you should just go.

One final note – one of the other very positive changes recently introduced to the Gate has been the quality of its graphic design and PR material. Has there been a more striking poster for a new production in Dublin this year than the image below?